My Support for President Trump

The reason I haven't been on Facebook much the past few years is because of the general sentiment there against President Trump. A good reminder for all of us is to never assume you know the company you are in when you are bad-mouthing someone. I've been a Trump supporter for several years and I love the President. There’s an assumption that Trump supporters fit a certain stereotype. In actuality, Trump supporters come from all walks of life, different races, ages, backgrounds and political leanings. I’m a fairly well-educated Asian American woman in my 40s, and consider myself an Independent. The reason many of us haven't spoken up about our support for the President is because we are afraid of being attacked. You can’t help but think that way when you're on Facebook and hear people you know use vitriol, condescension, humiliation and threats not only against the President, but also anyone who supports him. Those of you who know me know my character, so I hope it gives what I'm about to say some credibility.

I supported Bernie in 2016 and thought at the time Trump was quite rude and obnoxious (actually, I still do to a certain extent). But after doing a lot of research, I found the media to be unfairly anti-Trump and presenting a very one-sided narrative, often leaving out important context to a story so you purposely wouldn't get the full picture. In defining media, I’m including TV and internet news, as well as search engines that manipulate the search algorithms to show you only the results they want you to see (and bury what they don't), fact-checker sites and organizations that are not at all impartial, and social media companies that are actively censoring points of view they don’t agree with. Purposefully not allowing us to have the full picture is lying by omission, and if you don't think that would make much of a difference, here is a short but important demonstration of the effect of perspective on reporting (from a 1986 commercial by The Guardian, which has sadly gone the way of biased media):

There are currently crimes against humanity that the media won't report on involving worldwide child sex trafficking. (I've put together a page to go through and research when you have time and are emotionally calm: 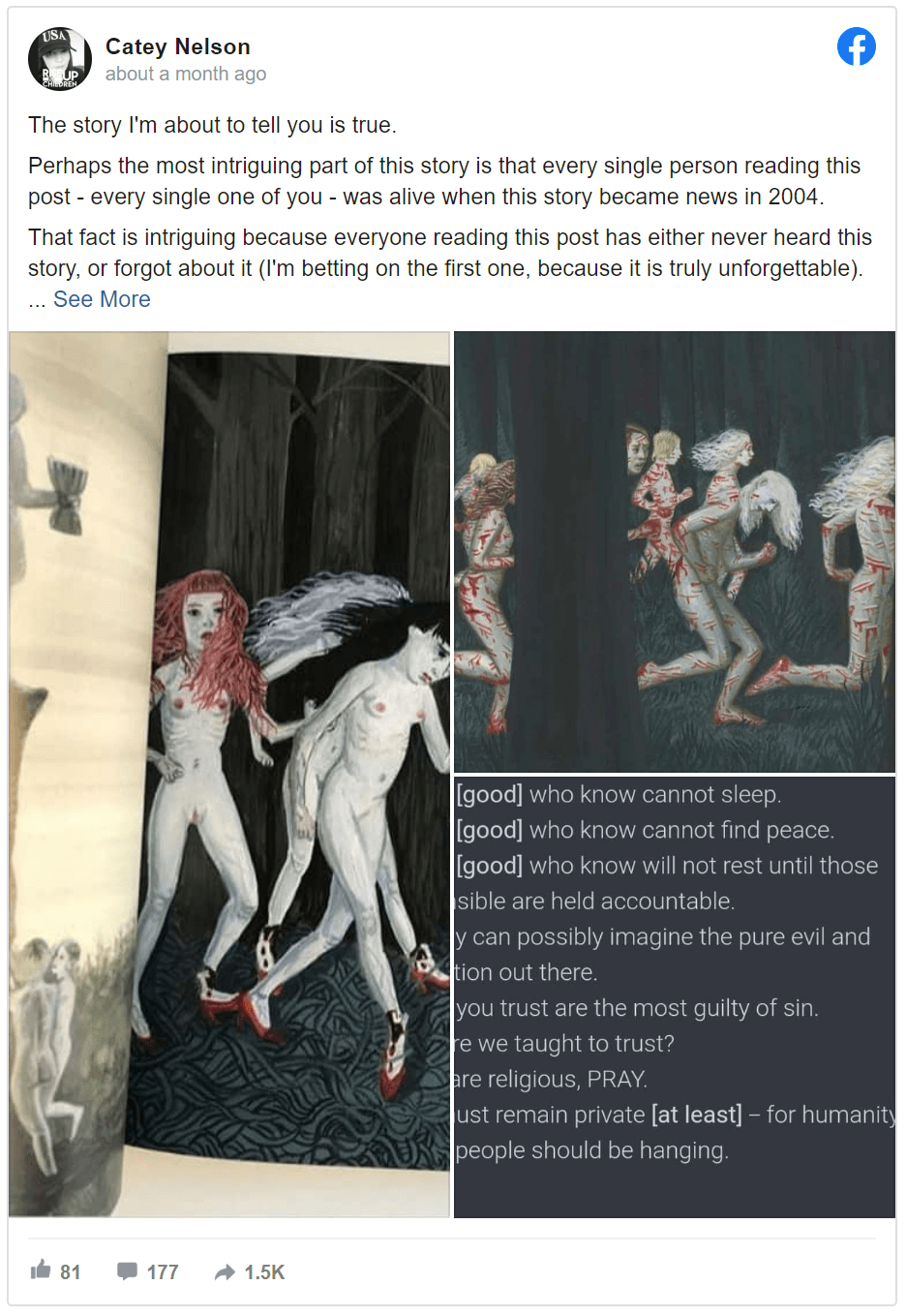 Many trusted organizations and public figures are complicit in these crimes, as well as the coverup. Yet we get distracted every day by superficial celebrity happenings, the endless pursuit of material objects, and engineered social causes which actually create more division among us. From our television, the mainstream media and social media we get a well-packaged narrative of the things "they" want us to believe. It's very good marketing, and it's also brainwashing. Look up Edward Bernays, and look up CIA's Operation Mockingbird, which was so successful that George H. W. Bush terminated it. (Look it up and then pause here for a moment to think about whether we know it was really terminated.) Keep the "marketing" part of this in mind because a well-packaged lie repeated over and over again by every entity is not only very believable, it can become the foundation of our beliefs. There's a reason they call it “tele” ”vision" "programming". Whose minds are they trying to "program", and with whose “vision”? If you think this is conspiracy theory, know that the term "conspiracy theory" was actually created by the C I A to discredit people who doubted the "official" story of the death of J F K. When the news uses the term “conspiracy theory”, it conveniently creates an automatic repel in people, which stops them from digging further for the truth. As history has shown over and over again, the “official” story isn’t always true.

If mainstream media is complicit in hiding important truths and crimes against humanity, how far would they go to protect themselves?

In my younger adult years, I realized the effect that watching the news had on me emotionally, and that it caused a lot of fear. So I turned off the TV years ago and have never had more inner peace, calm and happiness. Pay attention to the moments when you feel fear and anger, because it might just be originating from outside sources and artificially engineered in order to control you.

People need to realize that we are actually in the midst of World War III. Information warfare is how this battle is playing out, and it's for the control of our minds.

I agree that Trump doesn't have the elegance and poise of past Presidents, and that, quite honestly, is the least of my concerns. If you can see past the fog, you'll realize he is fighting for our fundamental human rights and defending the Constitution of the United States. If you snickered at what I just said due to cynicism, and what raced through your mind was the automatic pre-programmed response of all the bad things the news told you he did and said, I would ask that you please open up your heart and mind for just a fraction of a second to consider the possibility that perhaps this is someone willing to take slings and arrows and stand up to all the bullying to fight for the rights of EVERY SINGLE ONE OF US, all the while people are laughing and nit-picking at his imperfections.

My favorite Trump meme is this one:
"In reality they're not after me, they're after you. I'm just in the way." 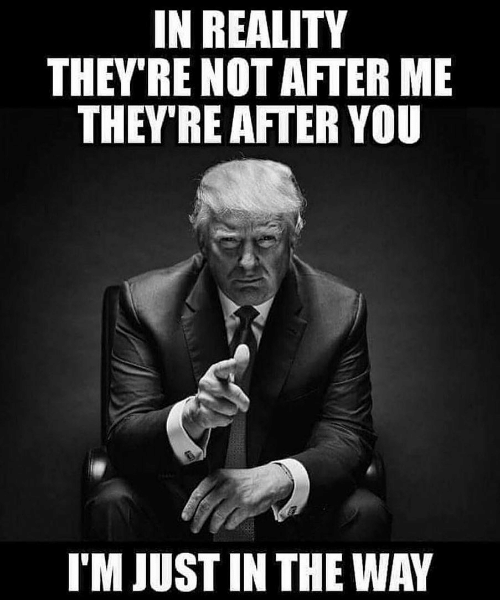 Pay special attention to what Trump said in this 2016 speech, which he gave prior to the election:

Peter Thiel, co-founder of Paypal, summed it up well. Trump supporters take what Trump says seriously but not literally. Media and non-Trump supporters take what he says literally but not seriously. The disconnect between Trump supporters and non-supporters is that Trump supporters see a Sun-Tzu "Art of War" in what he is doing in order to "drain the swamp", and in the process of doing so he tends to "keep friends close and enemies closer". If you take everything Trump does and says at face value with surface level thinking and assume he is not intelligent (which is sometimes part of his strategy to make the enemy underestimate him - I've personally used this strategy many times in my life), you might be missing the bigger picture. I’ve seen time and time again where he baited an enemy, which appeared as a “friend”, into the spotlight, so that they could self-destruct in front of everyone under their own actions. Here is an excellent article on Trump and The Art of War that is well worth the read.

Once you see behind the curtain (in reference to the Wizard of Oz) and see the truth, you will never be able to unsee it. 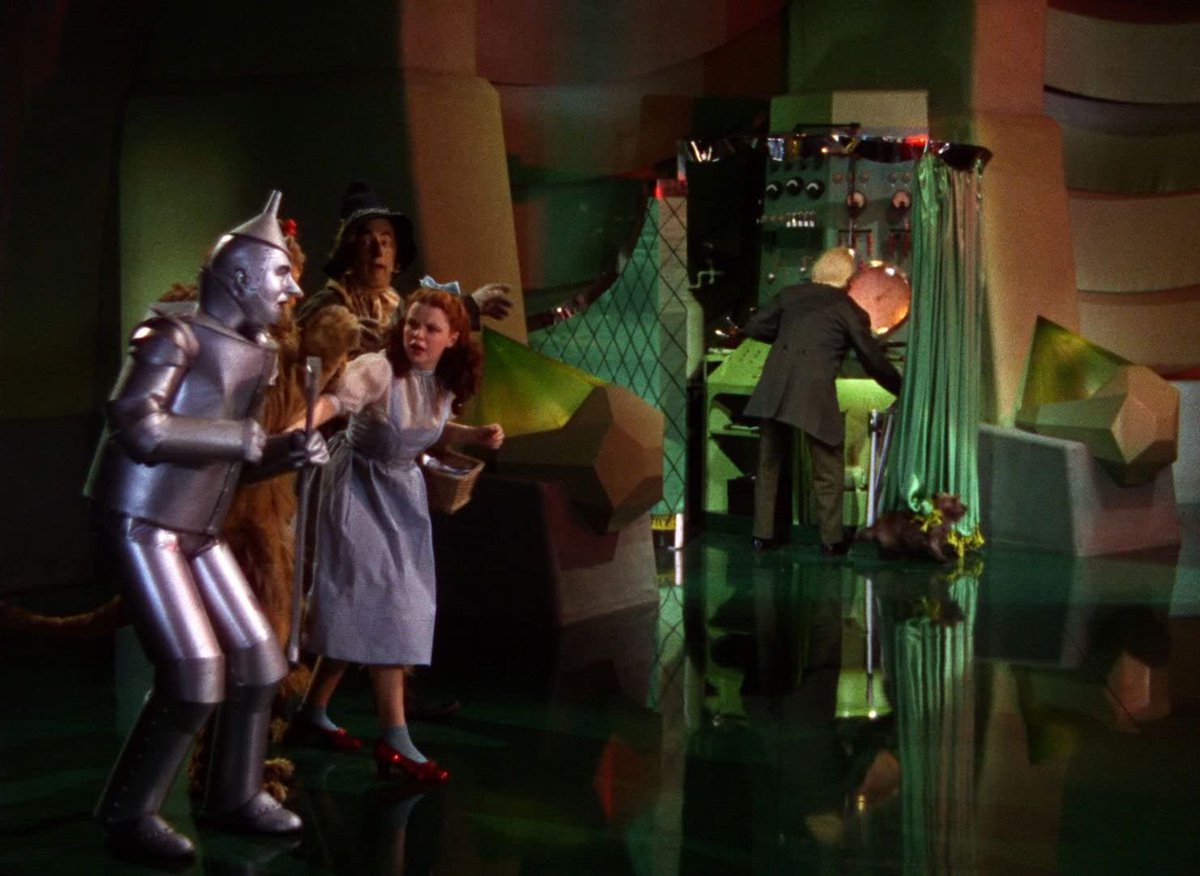 Many people who recently flipped from liberal to conservative, or who hated Trump before but support him now have said that a big reason was realizing the media was lying to us. Listen to and read these people's stories.

By the way, I actually think that people holding different political views can be friends. If you feel like you need to unfriend me because of what I'm saying, it absolutely is your choice and I can't and won't stop you. Remember that "inclusiveness" goes beyond race, age, social class and also means being tolerant of people who don't share the same political views.

If you've read this far, thank you for letting my voice be heard.

Everything said in this post is my opinion only, and does not reflect the opinions of my close family and friends. If you get to know my family, you will find that their opinions of Trump can be diametrically opposite of mine. And that’s fine. Lumping people into groups and assuming they all act and think the same way is something we need to refrain from doing.

I love you all and don't plan to respond to any comments publicly. I expect there to be a lot of negative ones, including petty attacks on my grammar and vocabulary. Ad hominem attacks are more telling of the character of the person actually doing them. I believe in freedom of speech. I believe in the sovereignty and freedom of the individual human being. I believe in medical informed consent. I believe in the right to privacy. I believe in one person, one vote. I believe in our right to search for truth. And I personally choose love and civility over hate and rudeness in what I say and do. I believe we are all connected in this world and connected through the same energy. I choose to be a positive energy of love and kindness rather than a negative one.

Near-term we have some tough times ahead, but the future of humanity is bright. We are all in this together, for where we go one, we go all.

Love and light to all of you everywhere.

And may God bless the United States of America.

Hear it from other people who have recently changed their view of the President and liberal political leanings, and their reasons.

Note: Cheri's Twitter account got suspended as part of Twitter's purge of conservative accounts. This is a backup copy I made of her Twitter video from March 2020.
After Judith Rose came out with this video (the person who posted it to Twitter was recently suspended by Twitter), Judith Rose's Twitter following ballooned to 50k followers in a matter of days. Her original account has been suspended by Twitter and she started a new one. This video had over a million and a half views on Twitter.

Oh damn! Why did I used to think he hated gays? How do they cover up THIS MUCH? I’m actually mad. But also glad I was wrong. 🌈 ❤️ https://t.co/8tXygxgbjP


"I’ve been a Democrat for 20 years. But this experience made me realize how out-of-touch my party is with the country at large. I think those of us on the left need to take a long look in the mirror and have an honest conversation about what’s going on. If you had told me three years ago that I would ever attend a Donald Trump rally, I would have laughed and assured you that was never going to happen. Heck, if you had told me I would do it three months ago, I probably would have done the same thing. So, how did I find myself among 11,000-plus Trump supporters in Manchester, New Hampshire? Believe it or not, it all started with knitting." 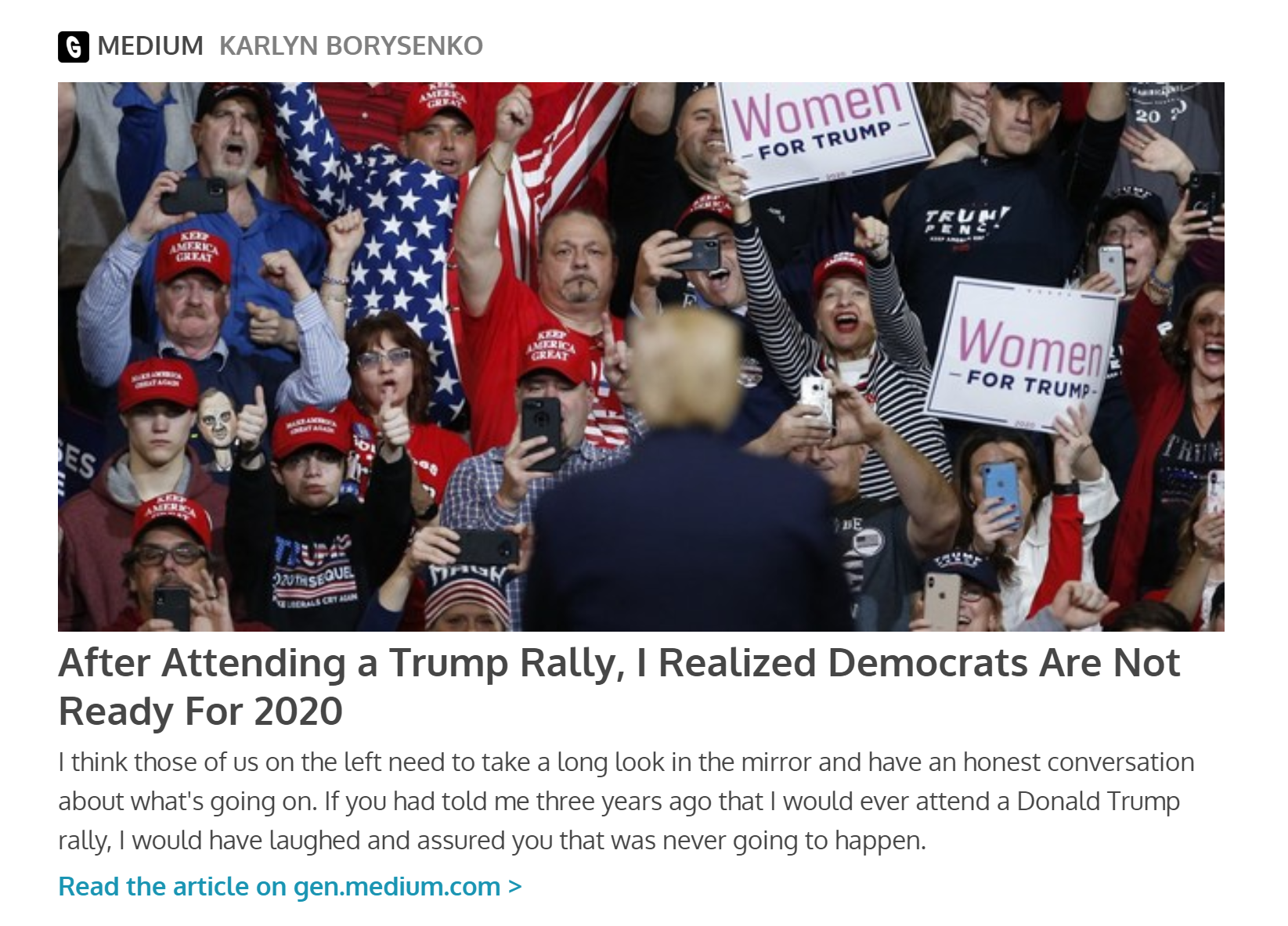 "I see increasing numbers of so-called liberals cheering censorship and defending violence as a response to speech. I see seemingly reasonable people wishing death on others and laughing at escalating suicide and addiction rates of the white working class. I see liberal think pieces written in opposition to expressing empathy or civility in interactions with those with whom we disagree. I see 63 million Trump voters written off as “nazis” who are okay to target with physical violence. I see concepts like equality and justice being used as a mask for resentful, murderous rage." 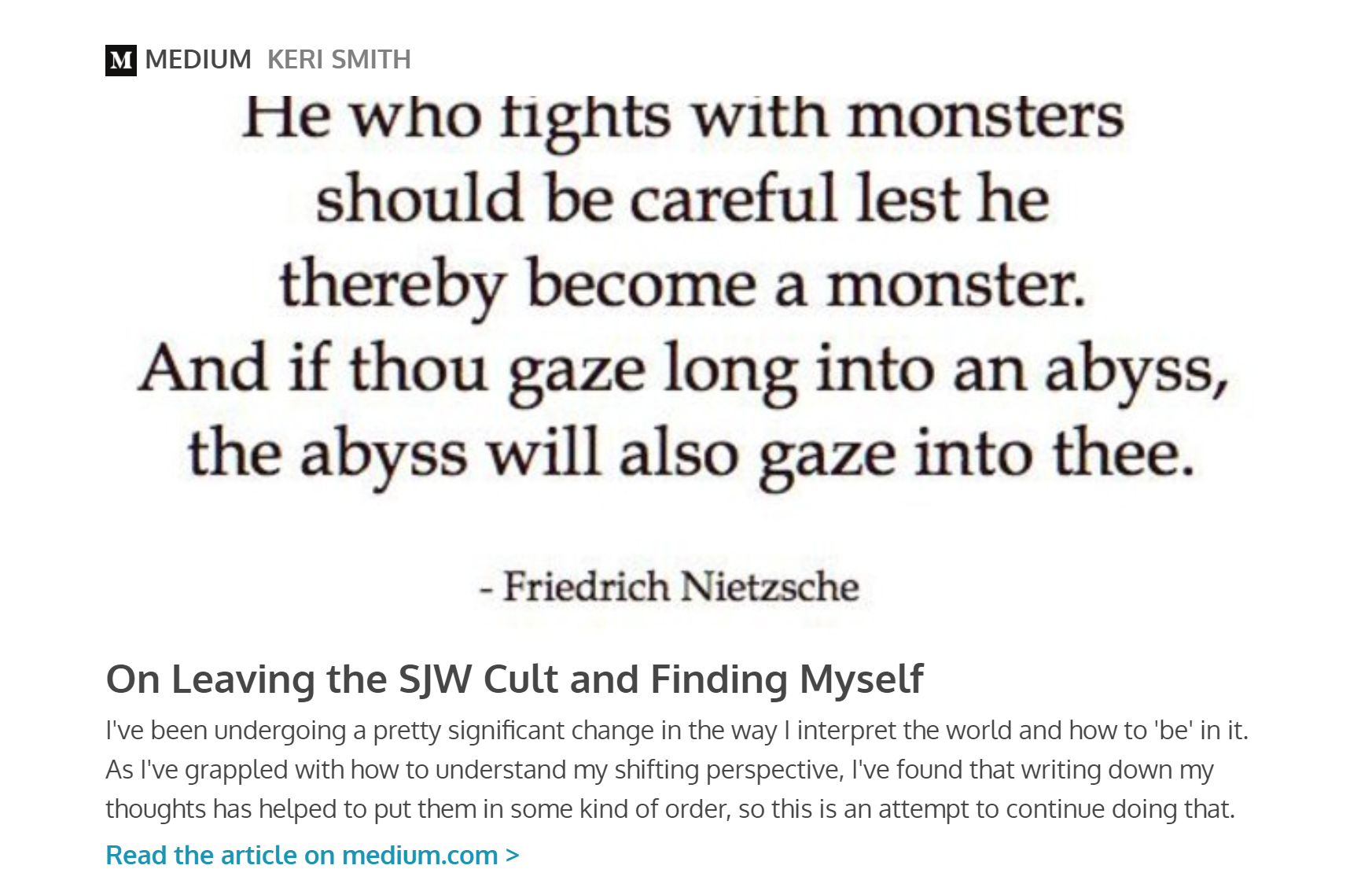 "I am writing to apologize for doubting your integrity for the past 4 years. I am a 56 year-old lifelong Democrat. I thought you were a typical Republican politician--concerned only about your bank accounts, tax cuts, deregulating allowing pollution and toxins to poison our earth. I thought you were a sexist bully, unintelligent, and had no empathy for the average middle class person like me. I knew the Democrats were not perfect. However I felt they were the lesser of two evils. I cried for two days after you were elected. It appeared to me that you brought more slimy lagoon creatures to DC instead of “draining the swamp”." 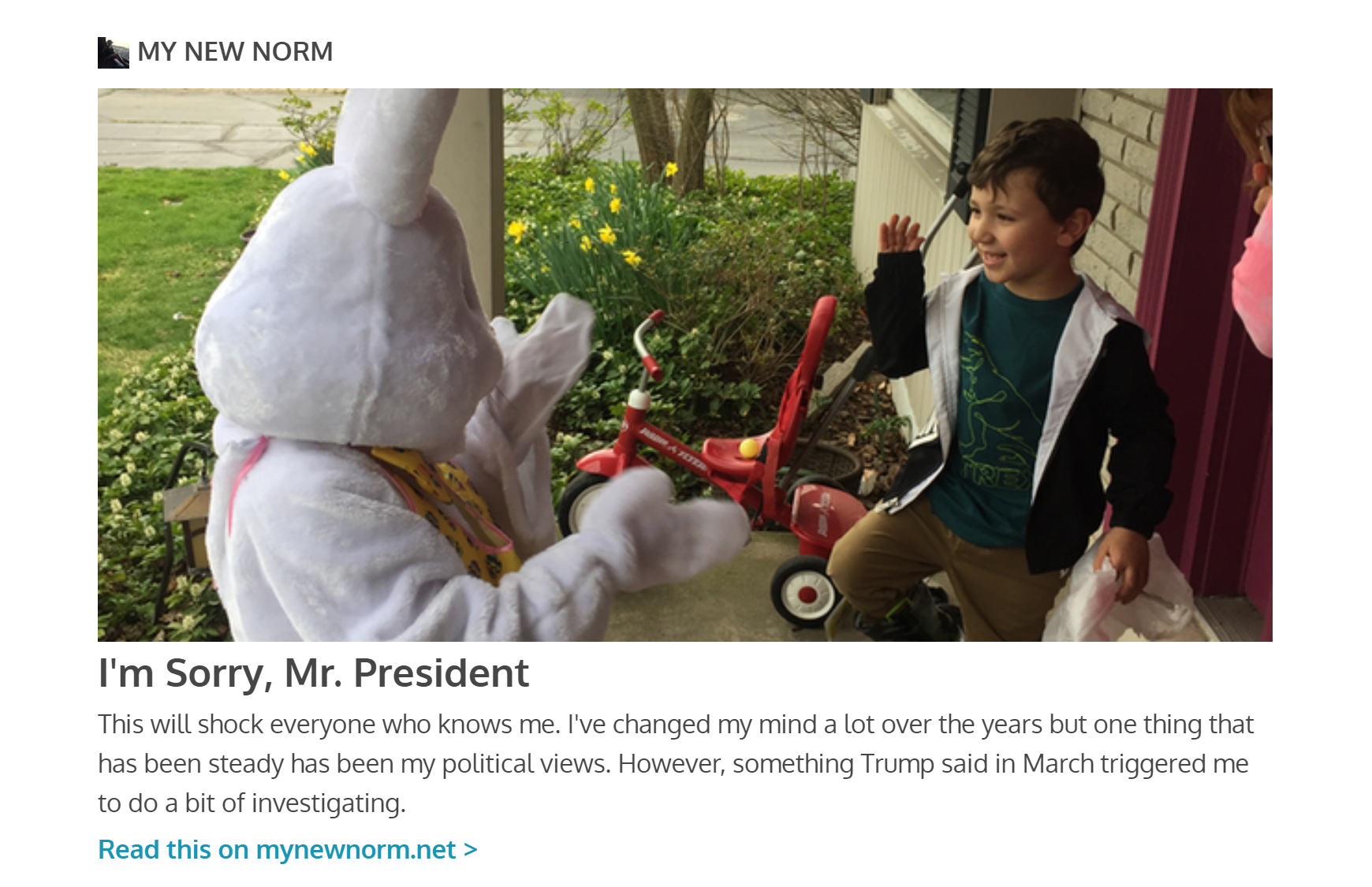